Excursion destinations in the vicinity of Zell am See Kaprun

The Salzburger Land in particular the Zell am See - Kaprun region is full of attractions.

Grossglockner High Alpine Road
The emperor Franz Josefs height owes its name to the Habsburg regent, who visited the country Carinthia in the year 1856 together with his wife Empress Elisabeth, called Sisi. On this occasion, the mountain enthusiastic Monarch von Heiligenblut made a hike lasting several hours, which led him to the edge of the Glockner glacier Pasterze. This place, from which his Majesty Franz Joseph admired the 3.798 m high Grossglockner, is named after him. The truly imperial vantage point can now be easily reached by car, motorcycle or bus on the Grossglockner High Alpine Road! In addition to mountain and glacier, you will see numerous cute marmots and, with a bit of luck, the impressive ibex.
Zur Homepage

Krimmler Waterfalls
The Krimml waterfalls are among the most breathtaking destinations in the entire Alpine region and every year amaze hundreds of thousands of guests from all over the world.

Discover the whole fascination of this spectacular natural spectacle in the Hohe Tauern National Park in the SalzburgerLand.
Zur Homepage

Mozart's birth place
In the middle of the heart of Salzburg, in Getreidegasse, came the genius composer at 27. January 1756 to the world. In the lavishly designed museum, you can follow the footsteps of the Mozart family on three levels based on original exhibits and gain an insight into the life of Salzburg in the 18. Century win.

To see: Mozart's Kindergeige and Chlavichord, documents, letters, portraits, furniture and objects of everyday life from the Mozart period. Tour with mobile guide, guided tours. Duration of the visit about one hour. Folder for children.
Zur Homepage 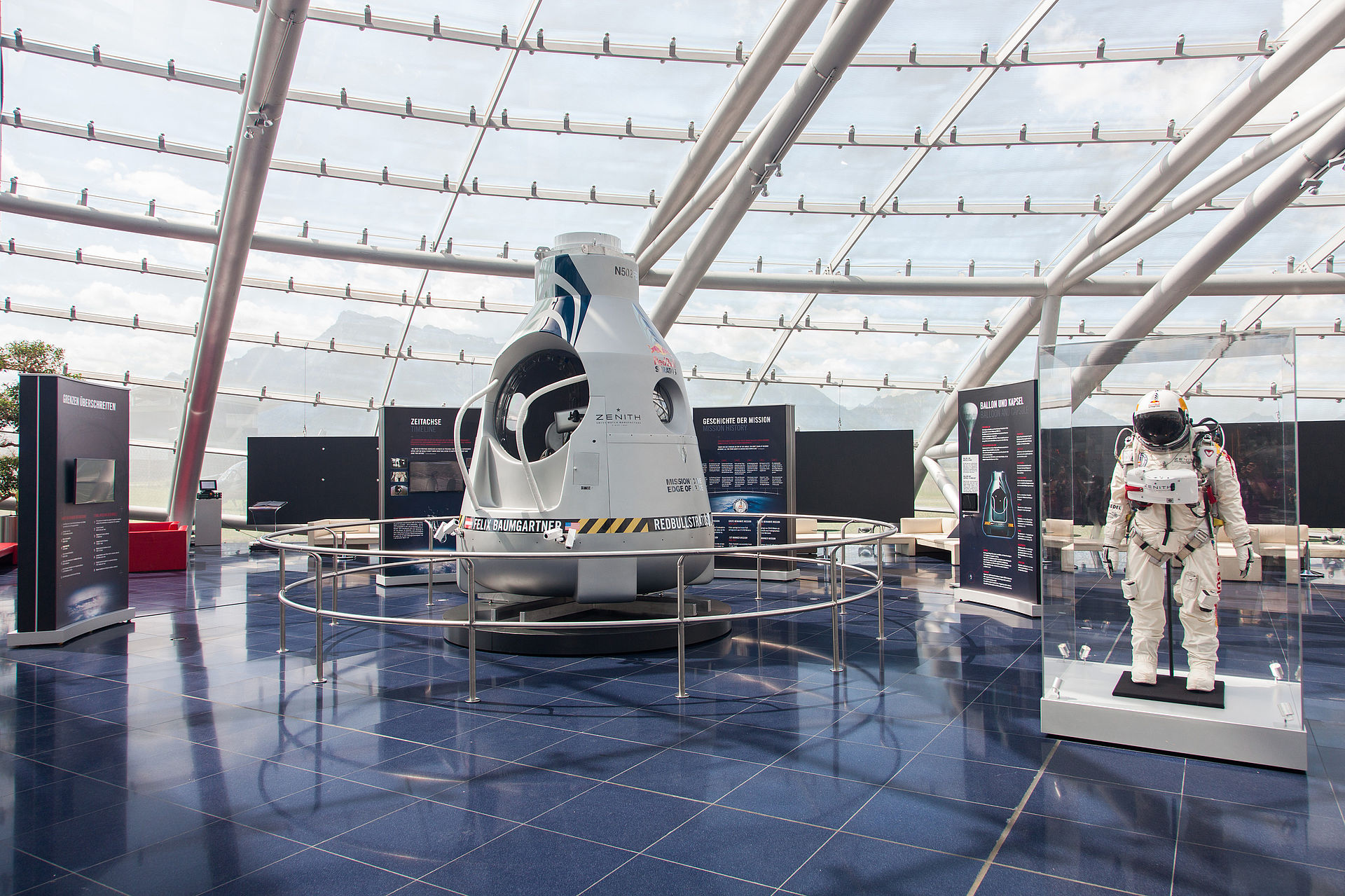 hangar 7
Immediately before the turn of the millennium - perhaps the date is coincidence, but probably the time was simply ripe - in Salzburg, the planning for the Hangar 7, When he opened his doors to 2003, not only had the airport been extended to include an exceptional building. The whole city was told by the Hangar 7 an enrichment Hangar 7 was from the first thought more than "just" a modern aircraft hangar. The vision of the developers was with the Hangar 7 to create a place where technology, art and entertainment meet.
Zur Homepage

local reservoirs
At around 2.000 m above sea level, nestled between the imposing rocks of the Hohe Tauern, are the Mooserboden and Wasserfallboden reservoirs. High up - to the VERBUND reservoirs in Kaprun You can comfortably reach the Mooserboden reservoir at 2.000 m above sea level with your own shuttle bus. There you can take part in a dam wall tour or gain insights into the eternal ice of the glacier world in the adventure exhibition. By the way, all around the breathtaking landscape invites you to go hiking. Your day trip begins at the Kesselfall-Alpenhaus, which you can easily reach by car or coach. The bus first goes through the Lärchwand tunnel, past the Limberg lock, the dam of the lower Wasserfallboden reservoir, past the Fürthermoar Alm, up to the Mooserboden reservoir at an altitude of 2.040 m. The Lärchwand inclined elevator will not be in operation in summer 2013 due to renovation work. For this reason, the transfer up to the reservoirs takes place continuously by buses. From summer 2014, Europe's largest open inclined elevator will be available again. The total travel time is approx. 45 minutes. Go deep into the interior of the Mooser-Sperre - the Mooser-Sperre dam rises almost vertically at 107 m and at the same time curves over 494 m between the rocks. We offer those interested in a guided tour of the dam rare opportunity to get to know the inner workings of the structure. Our competent staff will be happy to provide you with further details and many anecdotes from the long history ...
Zur Homepage

The largest ice cave in the world
Even at the end of the 19. Century was only known to hunters and poachers, the cave in the Tennen Mountains. Only 1879 penetrated the Salzburg naturalist Anton von Posselt-Czorich around 200 meters into the darkness and discovered the Eisriesenwelt officially. A year later he published, although a detailed report on his visit to the journal of the CAI, but the cave was forgotten.
A year later, the increasing number of visitors to build a footpath each of throwing and Tenneck to the ice cave. 1924 was Eisteil the cave continuously passable and 1925 was next to the researchers lodge a generous shelter that the development of Eisriesenwelt was named in recognition of the merits Friedrich Oedls. Around 25 years, the increase to the cave was possible only on foot. Under rather adventurous conditions could the first lane unpaved "Eisriesenweltstraße" ride and from 1953 then change to the cable car that the steepest part of the trail (1955 m - 1084 m) from 1586 mastered in a few minutes.
Zur Homepage

The top 10 in Salzburg

The top 10 in Salzburg
Built in 1077 by Archbishop Gebhard, considerably enlarged by Archbishop Leonhard von Keutschach (1495-1519) is the largest preserved fortress in central Europe.
Particularly interesting are the medieval princes' apartments and the Fortress Museum. Since 1892 Hohensalzburg Castle is easily accessible by a funicular from the Festungsgasse.
Mozart's birth place
Twenty-six years, from 1747 1773 to, the Mozart family lived on the third floor of the "Hagenauer House" at Getreidegasse no. 9. Here is the 27. January 1756 the famous son, Wolfgang Amadeus Mozart was born. The house is named after its owner and friend of Mozart, the merchant prince and dealer, Johann Lorenz Hagenauer (1712-1792).
Salzburg Cathedral
Probably the most significant sacred building on the city and its ecclesiastical center, the Salzburg Cathedral. With its magnificent façade and mighty dome it represents the most impressive early Baroque edifice north of the Alps. Its origin is closely connected to the nature and growth of the ecclesiastical principality. destroyed and rebuilt by fire, enlarged and expanded, it bears witness to the power and independence of Salzburg's archbishops.

National Park Centre
In the first room project than 3 m high wholesale reliefs the Grossglockner and the Grossvenediger as important pillars of the national parks in the air. In an eagle sailing high. If you circled this summit on the visitors' gallery, you walk almost around the Hohe Tauern. Before the peaks tense up obliquely to the viewers Large screen monitors, three on the north and two on the south side of the Hohe Tauern. 5 the large screen monitors with film sequences of ScienceVision are - each according to their location at the summit - the northeastern, northwestern, southwestern and southeastern valleys of the National Park zugeordnet.High 3D definition movie experience

A crash of the continents in super slow motion - the African plate began to drift to the north, the crust is lifted, pushed together, can be folded and the Alps arise. An elaborate animations in stunning stereoscopic images produced by science vision, let the viewers the origin of the most famous mountains in the world to witness the lapse.
Zur Homepage
Cookies facilitate the provision of our services. By using our services, you agree that we may use cookies.
additional information Ok